The use of the mule track from Stuben am Arlberg in the direction to the Flexen Pass was dangerous, especially during the winter season. The death registry from the Stuben parish repeatedly reports of accidents along the route. For example, in 1670, Matthäus Matt, from Nüziders, was "buried by the snow" with his horse. Johannes Jochum, in 1718, was killed in an avalanche on the path towards Tannberg. In 1730 Kaspar Kurzemann died after being caught for 13 days in the great "Gafri avalanche". In 1756, two young men from the Rankweil parish were buried alive by an avalanche in "Zügle" and buried in Stuben. Johannes Fritz from Bartholomaeberg and his daughter Katharina died in 1788, after a mudslide accident resulting from a strong thunderstorm. Ten years later, Regina Ringler from Lech was hit by a stone on the Flexen path and killed. In 1818 Basilius Wolf from Zug died in an avalanche on the way to Zürs. In 1852 Christian Werle from Bartholomaeberg was killed by a stone on the Flexen.

An accident that played a decisive role in the later construction of the Flexen Road occurred at the end of 1891. The cattle dealer Josef Anton Walch from Lech died in an avalanche and was found dead on January 5, 1892. The death of the young family man once again highlighted the need for a safe winter connection from Stuben to Tannberg. 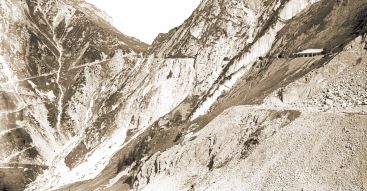