Good outcrops of shell limestone and Partnach strata can be found, for example, on the ascent from Flirsch towards the Ansbacher Hut, in the Schnanner Klamm gorge, and on the Flexen Road above Stuben. The Hölltobel (on this road) is a classic example of the enormous weathering of the Partnach strata. The Arlberg strata are developed westwards from the Arlberg, eastwards their place is taken by the Wetterstein limestone.

One of the greatest challenges during the construction of the Flexen Road was overcoming the Hölltobel (the ravine from hell), which had been given its name because of the fierce landformations. These landforms originated in the geological structure of the Arlberg strata. The well-known alpine geologist Otto Ampferer had already described them at the beginning of the 20th century.

As early as 1897, the course of the road travelled over an arched bridge across the ravine. This sight was and is a popular photo motif, which can be admired particularly from the old Flexen path on the opposite side. 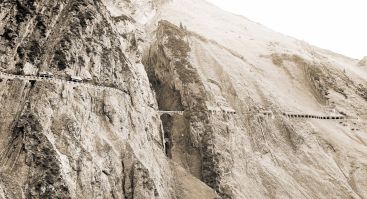 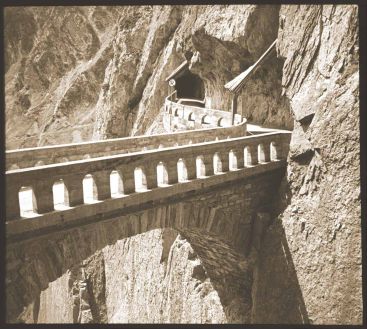