The project for the construction of the so-called Flexen Road, drawn up by the state engineer Ilmer, was submitted to the high government for the granting of a state subsidy and a state subsidy was promised for this purpose.

With the opening of the Arlberg Railway in 1884, the traffic volume over the Flexen Pass increased considerably. The Tannberg communities' trade, Lech above all, increasingly shifted to the south. The avalanche events of 1886 and 1891 contributed significantly to the calls for an avalanche-proof access road. In 1892, the Lech and Warth communities submitted a joint request to the Province of Vorarlberg Road Committee asking for the construction of a safe road. A key promoter of the project was the then mayor of Lech, Sebastian Walch (1854 – 1917). This marked the beginning of the preliminary work on the construction of an "artificial road". The provincial governor Adolf Rhomberg (1851 – 1921) commissioned the South Tyrolean Paul Ilmer (1850 – 1912), a civil engineer, who was employed as the county chief engineer. 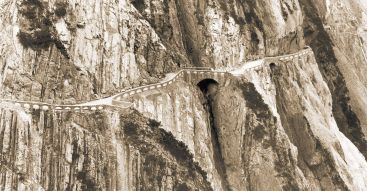