After the construction of the Arlbergbahn

In the foreground of the image we see a humble village, which is protected from the avalanches of the Erzberg by a strong stone dam; it is Stuben (1,418 meters), known by the local people as “the Emperor’s last parlor”. Until recently it was still an important postal station, but now presents a rather wretched picture in its inhospitable location. We are not planning to avail ourselves of the hospitality of the “last parlor” today, so before the lovely pass road reaches the village, we turn away from it.
Die Österreichisch-Ungarische Monarchie in Wort und Bild (The Austro-Hungarian Monarchy in Word and Image), 1893

After Stuben had really come alive during the construction of the Arlbergbahn railway between 1880 and 1884 and found its economy thus invigorated, there were hard times for its inhabitants in the years following the opening of the railway. The road over the Arlberg Pass was hardly used anymore, hence only a few people ended up in the village. The rise of foreign tourism eventually turned the tide, and without it the village would probably have been abandoned sooner or later. 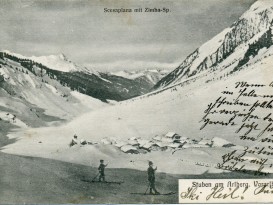 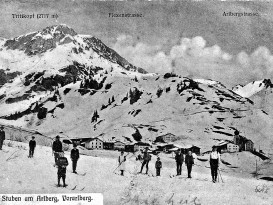 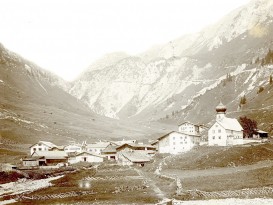