The history of a mountain village

In winter 2018, an open-air exhibition was opened in Stuben am Arlberg under the motto "The Emperor's last parlor". Large-format images with explanatory information as well as relevant literature references distributed all over the place invited visitors to immerse themselves in history. Of course, we will continue to make this exhibition accessible to interested viewers online. 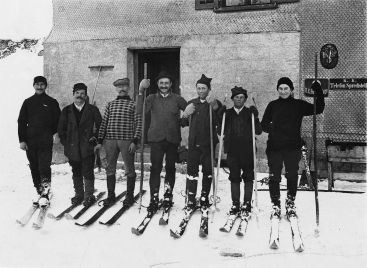 The theme for the first exhibition describes "The Emperor's last parlor" in pictures and short texts in German and English. The arc spans the history of the mountain village and begins with the quote from Joseph Ritter von Bergmann from 1868: "Right at the foot of the Arlberg lies the village and the postal station of Stuben with its 20 houses and 133 residents, known in common parlance as “the Emperor’s last parlor”.

While in 1800 the main industry was agricultural, carriage and road maintenance, in the course of the twentieth century the emphasis gradually shifted to tourism.

The exhibition is curated by Mag Christof Thöny, who in the course of this exhibition has researched new insights into the settlement of the church hill and in the so-called "Fuchsloch" (foxhole). The Fuchsloch was the birthplace of the ski pioneers Hannes and Friedrich Schneider. A dendrochronological report obtained by the Foundation Friends of Hannes Schneider showed that the wood used was beaten in 1592 and the house was probably built around 1600, which was much older than originally suspected.

Other exhibition contents include the construction of the Flexen road and personalities of the place such as the Lawinen (Avalanche) Franz Josef, the postal hostess Fanny Fritz, the ski racers Willi Walch and Rosa Riezler and several rarely seen views of the village, which document the change of time. 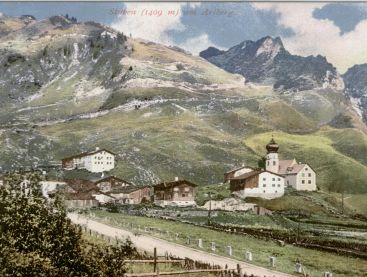 Right at the foot of the Arlberg lies the village and the postal station of Stuben with its 20 houses and 133 residents, known in common parlance as "the Emperor's last parlor"... 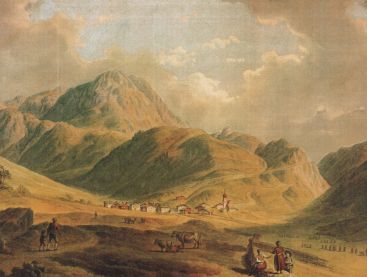 The main source of food for the parishioners is cattle rearing and some cultivation of potatoes and barley. Alongside the hitching services for wagons, they also carry out some conveyance themselves. In addition, they work on maintaining the road, clearing the snow... 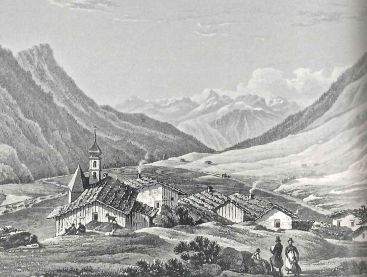 Stuben before the construction of the Arlberg railroad

The village still looks today as if it had only been established to serve those travelling on this road, as the last stop in the valley before encountering the inhospitality of the mountain. Its few houses are built snugly against the slope... 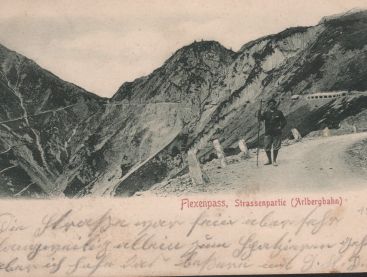 The Flexen Pass leads over the so-called "Flexen Saddle" (1750 m) from Klosterthale in the Lechthal valley [...] from Stuben using the Arlberg Pass road up to the [...] Kanzel, then winds its way to the old quarry, and from there through a tunnel... 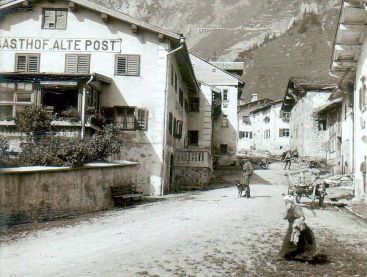 Characteristics of a village

The houses are all built in stone so they are naturally solid, and are carefully covered with good roofs, since the storms in this area are not to be trifled with. The houses are small and adjoin one another, making their resilience all the greater. The sole lateral street branches off... 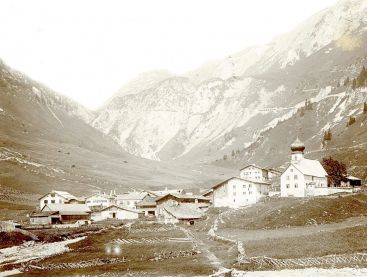 After the construction of the Arlbergbahn

In the foreground of the image we see a humble village, which is protected from the avalanches of the Erzberg by a strong stone dam; it is Stuben (1,418 meters), known by the local people as "the Emperor's last parlor". Until recently it was still an important postal station... 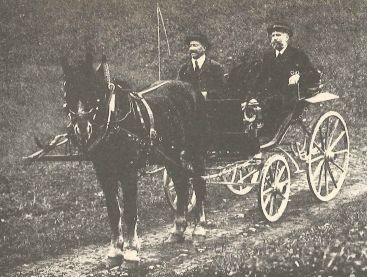 In 1900 Zürs was barely even a village, but rather a kind of foothill to the Walser farms of Tannberg. There was a tiny guesthouse called "Zur Alpenrose" with six beds, but it only operated during the summer. In winter it was occupied by a caretaker... 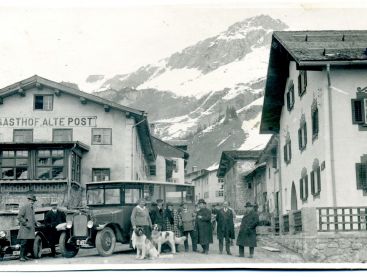 The Ulm section entrusted postmistress Fanny Fritz with the management of the Ulm hut, and right up until her death in 1953 she remained an intrinsic part of the mountain and ski history of the Arlberg; in fact, she was the mother of Arlberg skiing in the truest sense of the word... 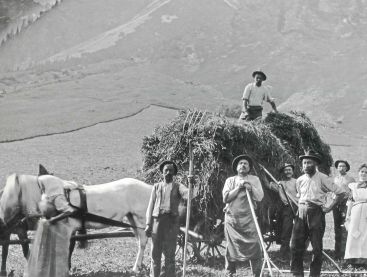 It's already October and we still haven't brought in all the hay. Even the meadow hay awaits the sun in the fields above Stuben, and there are thousands of hay drying poles hung with nothing but a few second cuts from Barz to Stuben. This morning was glorious and... 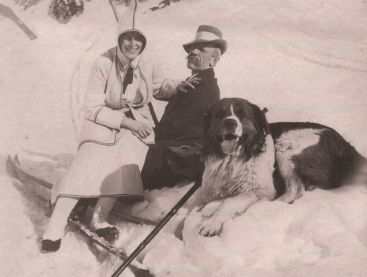 Fridtjof Nansen at the Arlberg

Well, today we are going to Stuben. We have to pack up quickly and get ready. (...) I am totally ex¬cited and take pride in pointing out the „Arlberg¬bahn" to Fridtjof. He and Olaf are reciting poems all the way. There is no sleigh in Langen, because we have called too late... 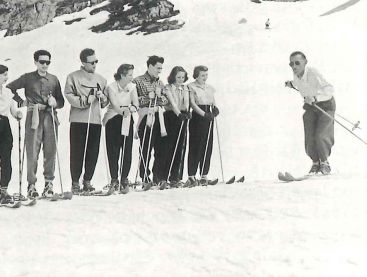 Stuben and the ski school Zürs

Zürs has regained its reputation as an international winter sports destination. The famous Schneider-Jochum ski school provided sporting impetus and diversion, and in some of the bigger hotels evening social events... 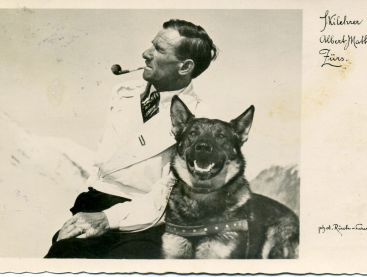 Zürs boasts the "Edelweiß" and "Alpenrose" guesthouses, each with 80 beds, while Lech has the "Krone" and "Post" guesthouses; all were fully occupied from Christmas 1924 to beyond Easter, with guests generally changing every 8 to 14 days, a sign that this area remains... 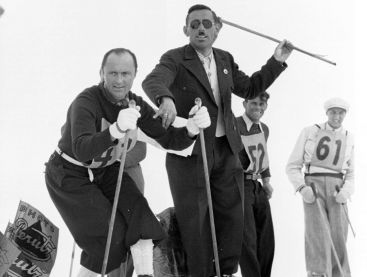 n magnificent weather, the second slalom race for guests and ski instructors in Zürs took place on Sunday, February 6. The course had been set by the director of Zürs ski school, Friedrich Schneider, and covered a difference in altitude of 200 meters for the first class, 150 for the second... 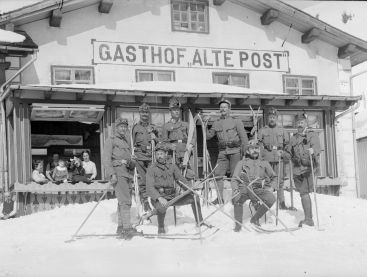 Due to the war, skiing is being promoted to us far more. Its use in emergencies – already a reality – among the fighting forces, primarily in the German and Austrian armies, gives it a kind of blessing, a baptism by fire, which is crucially important for its future... 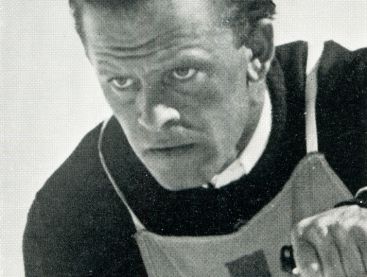 Alex Viktot, who attended all the big international ski competitions in the winter of 1936/37 as a special reporter, has published a list of those he sees as the ten best downhill skiers in the world in "L'Auto" magazine [...]: 1. Emile Allais (France), 2. Willy Walch (Austria)... 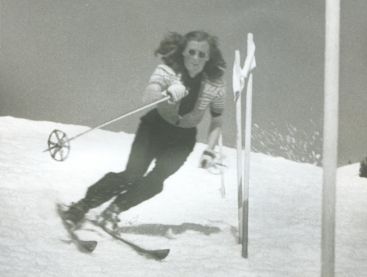 At the age of around 14 or 15 Rosa Riezler began skiing in her home village of Stuben, and it wasn't long before she was skiing in races. In the mid-1930s she celebrated her first successes, initially mainly within the region of course...