The main source of food for the parishioners is cattle rearing and some cultivation of potatoes and barley. Alongside the hitching services for wagons, they also carry out some conveyance themselves. In addition, they work on maintaining the road, clearing the snow, and opening up the frequently closed mountain pass, all of which is paid for by the grace of His Majesty the Emperor through the honorable imperial and royal construction department.
Pastor Peter Schaffner (1835)

The oldest view of Stuben am Arlberg comes from Franz Carl Zoller and was produced around 1800. It shows the village after the opening of the Arlberg Pass road via the “Posteck” in 1787 and before the great avalanche disaster of 1807. In 1808 during the period of Bavarian domination, the parish of Stuben was merged with the municipality of Klösterle, despite having been independent since 1666. 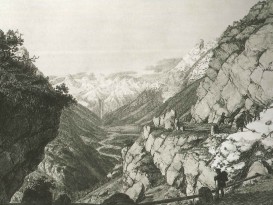 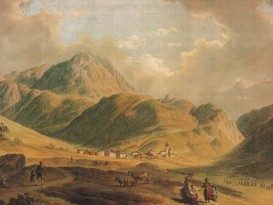