By now, the spectators had gradually begun to shift from one foot to the other and put their hands in their pockets and look around to see whether there wasn't anything warm. But no-one wanted to move to nearby Schwarzenberg, they wanted to see the big guns come in. The first were soon seen emerging high up on the slope. One of the first, Stuben-born Rudi Fritz had already recorded a fabulously quick time of 6.44.2. And then comes one after another shooting past the finish line at insane speeds. In between, occasional latecomers, welcomed with a loud hello who acknowledged this with a smile. The light blue sweaters of the Arlbergers appear here and there among the spectators, the red of the Innsbruckers can be found in another group.

From the description of the Tyrol and Vorarlberg Ski Championships on the Bödele (Vorarlberger Tagblatt, 5 January 1931)

Rudolf (Rudi) Fritz (1901-1951) was an excellent ski racer who contested numerous races for Ski-Club Arlberg in the 1920s and 1930s. The son of postmaster Franz Fritz also demonstrated his skiing talent time and again by skiing down from the Ulm hut which his family managed to Gasthof Post in just three minutes. Following the death of his father at a young age, he managed the hotel together with his mother, the legendary Post host Fanny Fritz. Rudi Fritz died at the age of just 50 in a water-skiing accident on Lake Zurich. 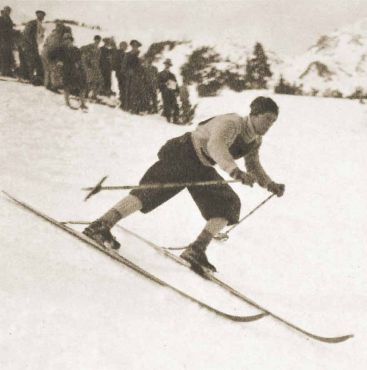