The Arlberg and its ski resorts

Stuben is one of the five stars of the Arlberg.

The Arlberg is one of the most diverse and most beautiful ski areas in the world: With the merger of its five destinations, Lech, Zürs, Stuben, St. Christoph and St. Anton, it offers Alpine winter sports lovers and vacationers who want to enjoy themselves a varied, top quality infrastructure found nowhere else in the world which is only available with a combined ski pass, the Arlberg card. However, the mountains also draw people in summer.

The Arlberg Alpine world is a ski and hiking paradise, brand and the best of the best for international guests and locals. The Arlberg is regarded as one of the most diverse and most beautiful ski regions in the world. The Arlberg – in actual fact a pass (1793 meters) which has linked the Austrian federal regions of Vorarlberg and Tyrol since the earliest times – has been the lifeline of the Klostertal for centuries and drawn people to it as if by magic. The abundance of snow on the west side of the Arlberg and the perfect ski slopes of the Albona guarantee an almost endless number of downhill runs in Stuben.

Situated between 1300 and 2800 meters above see level, with just on 100 mountain cableways and lifts, one of the most advanced and at the same time traditional ski areas of the Alps extends into unparalleled Alpine scenery. At the beginning of the 20th century, the success story of the Arlberg was concluded with the founding of the legendary Arlberg Ski Club, the forge of world and Olympic champions.

Arlberg is termed the cradle of the Alpine ski sport for good reason: Its well-situated residents have set important milestones with regard to the development of Alpine skiing and the development of the high Alpine area. The first ski course for locals was held by Dornbirn ski pioneer Viktor Sohm in 1906. The local lad from Stuben, Hannes Schneider, revolutionized the technique of skiing with the “Arlberg School” just one a year later, which spread worldwide. Forward-thinker Sepp Bildstein had the first ski lift in Austria built in Zürs in 1937, and in St. Anton the first gondola designed for winter operation, the Galzigbahn cable car, went into use. In winter 2013/14, with the Auenfeldjet, a two-kilometer-long, 10-person, single wire gondola, gentle expansion of the ski area was undertaken in the best possible manner.

In the meantime, thanks to the tireless local pioneers, guests in Arlberg now have 340 kilometers of marked downhill ski runs and 200 kilometers of high-alpine deep snow downhill runs for every ability and the most varied needs. Among them are prepared downhill runs of all difficulty levels, untouched powder snow slopes, extensive off-piste areas as well as fun parks for freeskiers and snowboarders. With an average of seven meters of snow between November and May, the cable cars and lifts on the Arlberg operate reliably, even during winters with low precipitation. Sporting challenges are on the agenda in snow-rich Stuben.

In summer, the extensive hiking area offers numerous activities – from attempts on the summit through to enjoyable hikes, from children’s discovery trails through to acting as a popular starting point for tours of all types. Motorized and unmotorized bikers know the region is a perfect route. 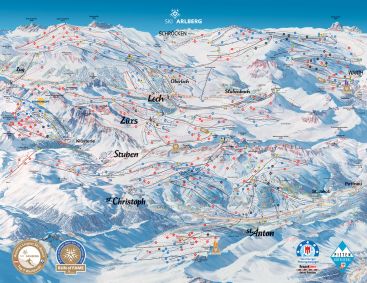 There is the Golden Moments Club Card especially for day tippers. In this way, club members gain direct access to the slopes whenever and wherever they want. The ski days or ski half days (usable from 11 am onwards) are booked at the correct price from your credit card – automatically, securely and openly. More at www.skiarlberg.at